“Art historically, Neo-Latinoism stands as the 21st Century’s first Hispanic art movement.  Thanks to Villarreal’s enlightened revival of Neo-Latinoism, the possibility of an artistic community linked by cultural solidarity is growing. Under Villarreal’s curatorial leadership, the second wave of the Neo-Latino art movement is being launched in winter 2014-2015 within County College of Morris’s new CCM Art Gallery, featuring cutting-edge images of social significance, imaginative visions, and strong visual vitality that are both archetypal and intrinsic to contemporary Latino community(ies) in the metropolitan area.”

4 thoughts on “A Blend of Paint & Culture” 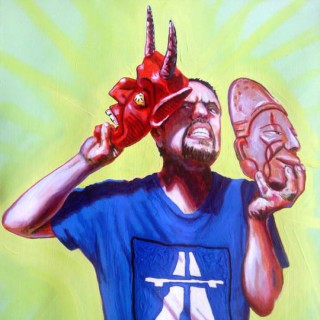 I am a professional California artist, poet and college arts educator originally from the San Francisco Bay Area. I am fully engaged in my work and dedicated to producing provocative, relevant, figurative work with a "pop-Latino-surrealist-socio-political sensibility" as well as a "web-based awareness". As I have said, my image making with words and colors are truly all about the urgency for making images with materials and about this great human drama we are currently living ! http://www.facebook.com/gabrielnavar http://gabrielnavar.com @gnavar